The JEM24 Expansion Module provides access to up to 24 buttons and lamps. Three JEM24 modules can be simultaneously connected to the J169 IP Phone and J179 IP Phone. You can extend the number of call appearances and feature. The call appearances and features that Avaya J100 Expansion Module displays also appear on the corresponding lines on the phone. You can connect a maximum of three expansion modules to the phone. The expansion module inherits the display properties from the phone it is connected to. 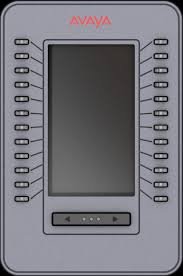 • 4.3 inches, 272 x 480-pixel color display that reverts to grayscale when connected to J169 IP Phone.
• The Avaya J169/J179 IP Phones support up to 3 button modules, and each button module can take both Stand and Wall mount positions together with the phone.
• The J100 Expansion Module provides access to up to 24 buttons and lamps with ability to display 3 pages when a single expansion module is used.
• Each feature/line button has a red/green indicator.
• Pre-configured background or screensavers are available to match the base phone.
• Power is supplied by base J169 or J179 IP Phone (PoE class 2). If 3 expansion modules are attached to J179, then the external 5-volt power supply is required.
• On Avaya Aura® and Avaya Approved Third Party Platforms, users can customize to determine which features/lines are positioned on the module.
• Supported on J169/J179 with both H.323 and SIP software.